Mischief calved today....you remember Mischief our holstein cross heifer we got for company for Katie. The heifer that lives up to her name. 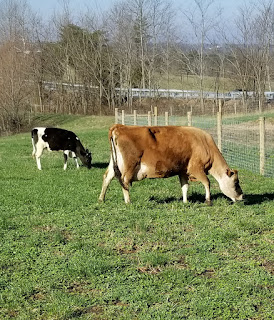 A young Mischief with Katie. 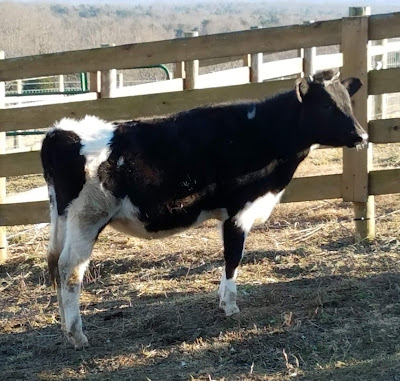 She was shaggy but you could still see she was a good calf. 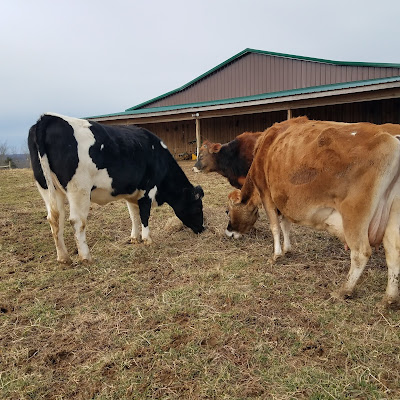 She grew well and showed all the signs of being a good cow.

We bred her to Applejack. Her due date was December 14th. 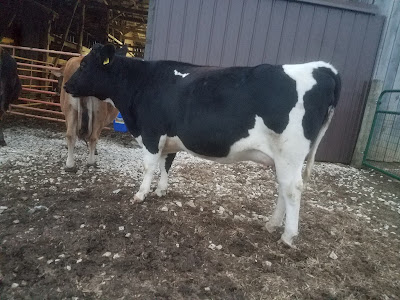 She is big and broad...a lovely two year old, but then she started to udder up.
All along her udder looked good. Short tidy teats with good attachment and positioning.
Things changed badly. Her teats which were small, ballooned badly...the hind teats are ghastly and shaped like triangles. 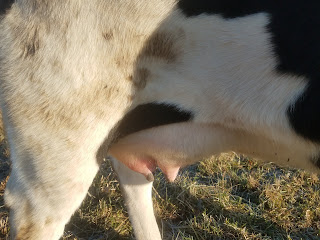 They are showing development problems here, they got much worse.

She developed edema which heifers often do and she had fluid along her belly.  Today when she calved I knew it had the potential for problems. I wasn't wrong. The calving went well. The calf is tall and lanky, weighing in at 85 pounds. He is a really good calf. 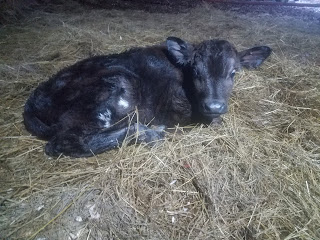 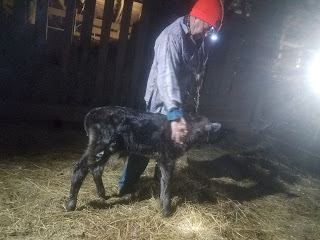 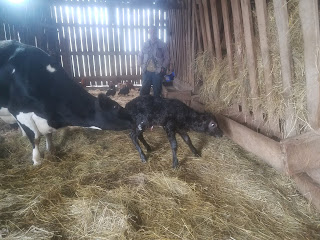 He got up quickly and hungry going almost immediatly to the udder. Mischief was so good and stood like a rock. He latched on a front teat and sucked away....then stepped back and started looking elsewhere. I thought that was odd. Her front teats are not good but at least shaped enough a calf can suck them. I check for milk...nothing. Not a drop and the teat feels odd.  So I checked the other front teat. No milk. The nursing had triggered Mischief to let her milk down and it was literally pouring out of her back teats. The back teats are the worst shape ever but I could squeeze them enough to milk a bit. The poor calf tried but just couldn't get a good hold. I milked a quart of colostrum into a bottle and fed the calf. Its so frustrating. Mischief stood perfectly for the calf, she let me milk her as calm as can be. She is beautiful. She had an awesome calf and her udder is a catastrophe.  Her edema is going down. I will massage her udder with warm compresses in the morning. The calf is really strong and I am hoping overnight he figures out the back quarters. I am going to call our Jersey guy and ask about udders and we will deal with it but it is a good example of unknown genetics.

We bought Mischief cheap. The man we got her from said she was half Holstein and half Angus. I was skeptical because a purebred Angus  bull will sire 100% polled calves and Mischief had horns. There are a number of breeds that are black. Simmental, Limousin and Gelbveih to name a few. Angus cattle tend to have good udders, so do Holstein. Udder quality is passed from the bull, in this case a completly unknown factor.

So calving season 2019 is over for us. 2 of 3 cows conceived. 1 heifer calf and one bull calf, both healthy vigorous calves. On the milk front not so good. Lassie is a nasty kicker, it was the reason I quit calf sharing with her last season.  To be honest I had pinned my hopes on calf sharing Mischief. That doesn't look like an option.
I miss my quiet time milking Katie, Mischief stood like Katie which makes it worse.
So there you have the latest news. If you are considering a family cow but want to buy a heifer make sure you see her mother and get information on her sire and what his daughters are like.

God bless all of you and be safe.