Fancy name and yes fancy turkeys. These birds caught my eye years ago but I could never find poults available anywhere near where I lived. They are simply beautiful birds with their black and white plumage.

The ALBC describes them this way:

"The Royal Palm is a strikingly attractive and small-sized turkey variety. The first birds in America to have the Palm color pattern appeared in a mixed flock of Black, Bronze, Narragansett, and Wild turkeys on the farm of Enoch Carson of Lake Worth, Florida in the 1920s. Further selection has been made since then to stabilize the consistency of color and other characteristics. As an anonymous breeder wrote to Feathered World magazine in 1931, “Turkeys of this type of coloration do crop up by chance where different color varieties are crossed . . . but it takes years to perfect their markings.” The Royal Palm was recognized by the American Poultry Association in 1971. It is similar to a European variety called the Pied, Crollwitz, or Black-laced White, which has been known since the 1700s.

Royal Palms are active, thrifty turkeys, excellent foragers, and good flyers. Standard weights are 16 pounds for young toms and 10 pounds for young hens. The Royal Palm has not been purposefully selected for either growth rate or muscling, being used primarily as an exhibition variety.


The Royal Palm lacks the commercial potential of the other varieties, but it has a role to play on small farms, for home production of meat or where its ability to control insect pests would be of value." 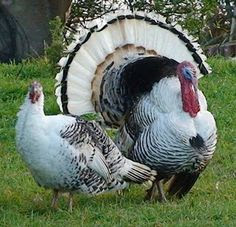 The Royal palm poults were the same size as the Slate and Chocolate's when they arrived, but they were just white, no indication of their mature color at all.  They were the most active as well being the very first to jump out of the water trough brooders we were using. I would here loud PEEP PEEP PEEP and know someone was sitting on the door sill wanting back in with their friends.

Again these heritage breeds are fast to learn about food and water and we had no trouble getting the Palms on to our feed regimen. 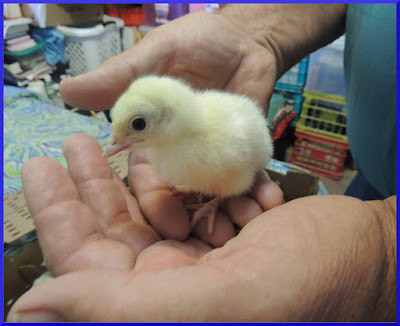 A Royal Palm Poult just out of the box.

We liked the activity of these poults very much, they were great talkers too and if I make a turk turk turk noise I was sure to get a barrage of cheery noises back from the Palms first, then the other poults. 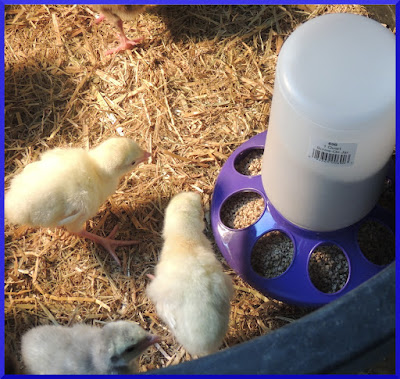 They have good appetite and seemed to eat as a group, the other two breeds might mix but the Royal Palms seemed  more likely to be together.

Their slower growth rate did not become apparent until about 3 weeks of age, they are finer boned and overall just a more refined bird. They have continually become more social though and they liked to be held as small poults, often going to sleep in my lap. They grew out of this habit at about 6 weeks. Well the sleeping in my lap part of that habit!

They got their first feathers with no sign of the black bars any where, they were just white turkeys. Then at about two months there was faint barring on the wing feathers that showed a hint of their future color. These are flying birds. They are smaller and that light frame and bone structure makes them extremely athletic. When we first started putting the poultry outside during the day the Royal Palm were the first to fly up on the brace posts of the fence to perch and preen. 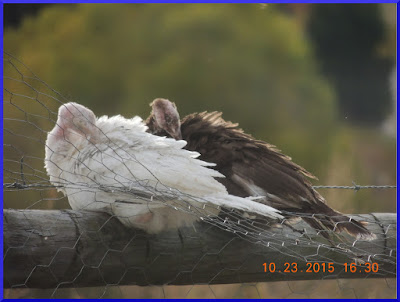 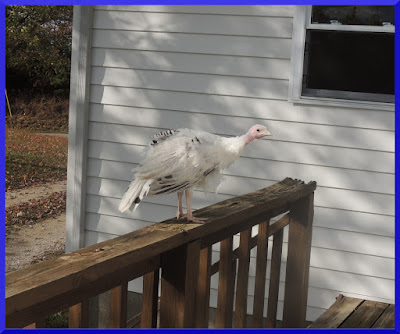 Here you can see and awkward juvenile with the first sign of the Royal Palm coloring.

They are certainly smaller, the difference in size is more apparent with the Tom's though. The Hens are the same size as both the Slate and The Chocolate. The Palm Tom's are as tall as the other two breeds but leggier without the mass the other two breeds are starting to show. They will be very good turkey's for the two of us. However they will not produce the extra meat per bird to make soup, can or make sandwiches out of.

They do forage though and love to go out and hunt through the tall grass to the west of the barn, they scratch amazing furrows in the old round bales behind the barn [these were left here and we hope to use them for mulch, the turkeys are helping with that process] and are also a bit of a hazard when we chop firewood, they are the only one of the three breeds that actively look for grubs in the wood as we cut and split it.
Now they have matured their color has come in beautifully and they really are stunning. When they display they have bands of Black around their tails and lovely lacing of black faintly edging their neck feathers. They turn incredible blues about the head and snood, we always waste time admiring them. They are snoopy and curious, they just enjoy being around us. They do have a shiny object addiction though and love to peck buttons! 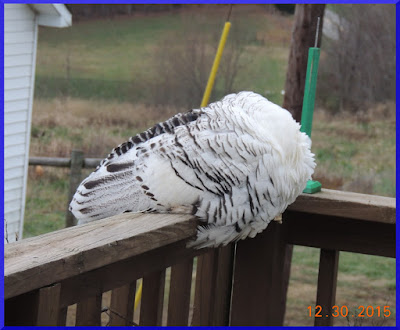 If we have gone inside for lunch we often come out to someone napping on the deck railing waiting for us. 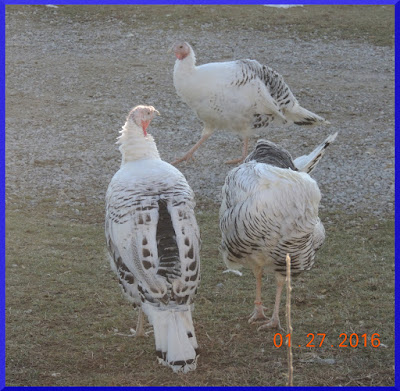 Two Royal Palm Tom's standing around as a hen marches by.

Here are two photos of barring patterns on some of the turkey's now they have mature plumage. 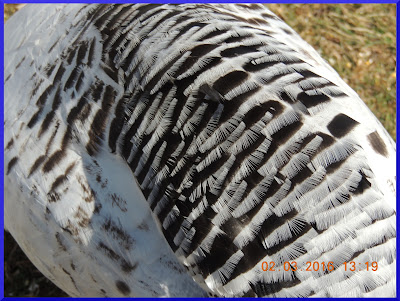 This is on the back of one of the Tom's. 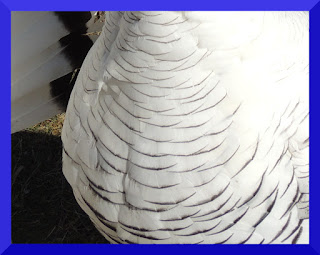 Here is fine pencil barring on the feather edges, it is on the turkey's chest.

Overall these are lovely birds to look at and I believe will be great table birds for us. If we had a family of more than two though I think they would be much too small. They really are not much more than a large chicken despite their Turkey curiosity and friendliness. If you want a bird for two or three people to use and not get overloaded on turkey, if you want a beautiful bird to grace your farmstead, if you want social birds to give you hours of enjoyment....this breed is perfect. They do have the drawback of being excellent fliers and you have to watch them because they WILL follow you into the house. Ralph and I are very glad we tried this breed and are enjoying them very much. Next test of course is the actual taste test followed by their ability to brood and raise their own poults. Now out to admire the Tom's...we have to keep their ego's in good shape. 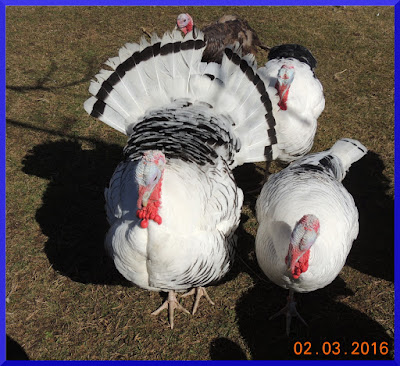 Take care and be safe out there.