Once Upon A Crazy Summer.

Hello there, it’s been much too long since I wrote a post. I looked at the Calendar yesterday and wondered where the summer went. It has been filled with adventures.

Our refrigerator and washing machine died the same week. Anyone with a fixed income can tell you the shuffling that takes place when you get sudden big expenses. We could not find a place to fix the washer which is frustrating as I am sure it is repairable. The fridge had been an issue for some time. We had a propane fridge that came with the other propane appliances in the home. It worked perfectly well in the fall and winter. In summer it struggled to maintain cold. I learned to open it as little as possible and to keep thermometers where I could see them. We discussed an electric fridge more than once but then the power would go out and we would smile.

Then it just got worse. Finally completely failing to keep food cool. We checked everything and all seemed fine but not a breath of even faintly cool air was to be had. The expense or replacing a propane refrigerator was simply not in the cards. We now have a very nice electric refrigerator. Plus a spiffy new washing machine that got run ragged catching up to the back log of farm laundry.

The loss of household refrigeration showed me something about our food stores, we are doing well. We have home canning that was tasty and safe, picked produce from the gardens and other than icy cold drinks.....did not suffer too much at all.

Ralph fixed the cold drink issue with frozen bottles of water in our big cooler. We freeze them in the deep freeze and switch them out as needed in the cooler, in fact we are still doing that. It gives us cold and filtered drinking water without the fridge being opened and full of water bottles.

Our hay crop was good. Trading with our neighbor worked well. He got all the first cut up and baled with his big round bales, it was for his stock. The second cut was ours but he baled it with his square baler. 250 manageable sized bales are stacked neatly in the loft. They smell so good but Ralph is having a real adventure finding the new places the hens lay eggs. We think we may still have to buy some hay but if we do it will not be very much.

The pasture rotation has not been perfect, but we are getting better at reading our grass. The two paddocks we lost to 12 foot weed cover last year are looking good, we just bush hogged them to level our the growth for the next cycle. They are coming back with good grass and much fewer weeds. The new areas out back are getting grazed as hard as we can, we still don’t have enough large stock. The steers are growing really well and are starting to make an impact with what they eat.

It’s interesting to see how much more horses eat than cows. Our Amish neighbors moved and sold their land to a family with horses. We think there are at least 17 horses making their new home here. In three weeks they have totally peeled off any grass and at least half the weeds in the 7 acre field and they have been moved to the big hayfield next to our house. It is being noticeably chewed. NO we are not getting horses for grass control!

However we did get another milk cow. When Dean Foods lost the milk contract to Walmart, 127 small dairies [under 200 cows in milk] lost the ability to sell milk. The man we got Katie from was of of them. He called us about a young cow he had that he thought we might like. We did and now have Lassie. Plus 4 calves he just had no time for. He has been a dairyman all his life, his farm is third generation but it ends now. A casualty of Walmarts 98 cent a gallon milk!

Okay before I really get ranting, here are some photos of our summer into fall small farm and the critters that live here. 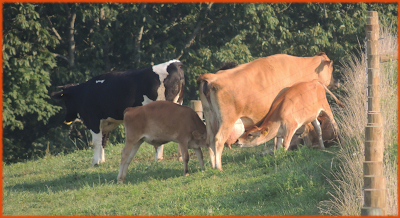 Katie out in the lane with Rocky, Bullwinkle and Mischief. This was before we got Lassie. 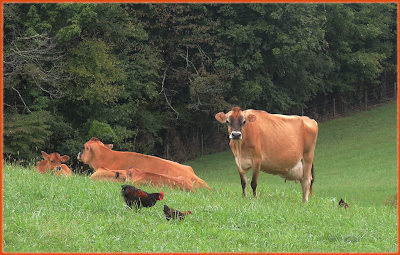 The two Milk cows with the 4 bull calves we share the milk with. The cows have taken two each. The amazing thing is Katie [with these last two] has fed 5 calves since we got her and given us a wonderful supply of  milk as well. Yes we do feed Katie grain. Non-Gmo and a balanced ration, not a hot barley or corn ration and not too much.
The younger cow, Lassie, who is 4, has two  sharing with us as well. She is taking longer to gentle than Katie did. Her disposition is entirely different. She is getting more grain than Katie but she is finally starting to get a bit more condition. She is a much frailer type Jersey. 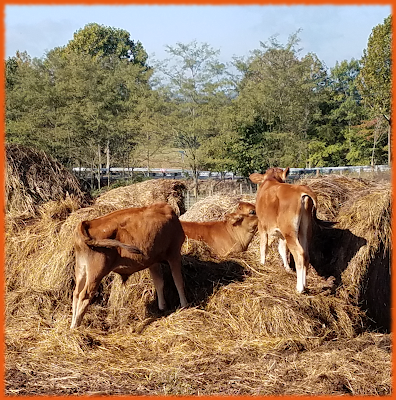 The 'Boys' making  mulch as we refer to their  goat like climbing on the old hay bales. We  let the cows and the calves  run around the old bales as they choose. Then we pick the trampled hay and manure combination to put on the gardens for organic and added fiber. 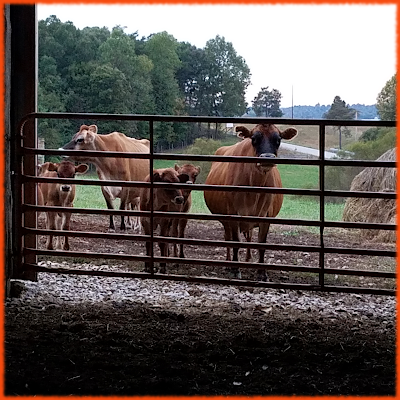 This is what greets us in the evening. Starving cows, needing feed, PLEASE! We keep the calves in separate pens at night to keep a schedule for sharing milk. Plus we give them a light calf ration to hep get their rumens used to feed. It also is one of the best ways to gentle cattle and get them used to being handled and moved through the barn. 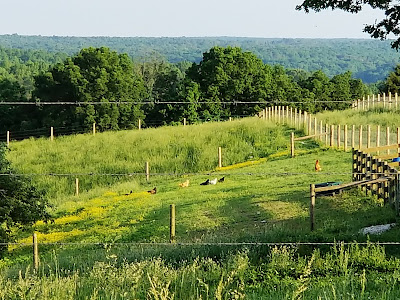 Late afternoon in the pastures. You can see we have not won the war on the 12 foot weeds but we have made huge gains. The chickens are out where the weeds were taller than the tractor and bush hog last fall. The further paddock is where the cows were grazing at this time. 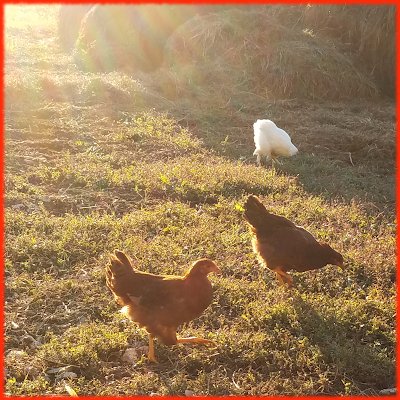 Young pullets at Sunset, out for a snack before bed. The newer generation of chickens don't go to bed as early as the original flock which is interesting to see. 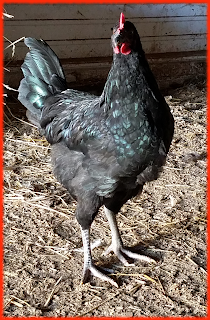 Never leave Ralph unattended with a Hatchery catalog! Here is a young Jersey Giant Rooster. We ordered some more chickens to get new genetics, originally we just wanted to replace the Buff and Buckeye hens that are getting old. However I was doing laundry and Ralph had a blast. Jersey Giant, Cochin, Dark, Light and Buff Brahma joined our replacements! 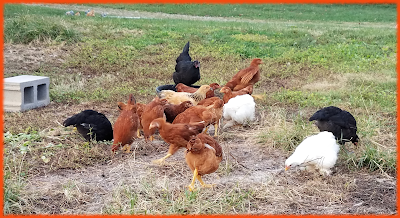 Then it got more colorful. The hatchery made a shipping error. Strapping our small order on top of a bigger one. Golden Laced Wyandotte and New Hampshire Red, for a total of an additional 54 chicks arrived with ours. They were all girls! Both breeds are breeds we like and now like even more. The New Hampshire Red are super friendly and just really nice birds. The Wyandotte are bold little girls that go all over the place.

The New Hampshires quite enjoy sitting with us on our patio chairs! 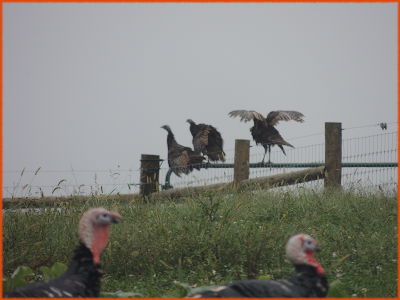 The wild Turkeys love the changes we made. The cows leave the best pattie snacks and the gates and bracing for the fence are perfect perches. 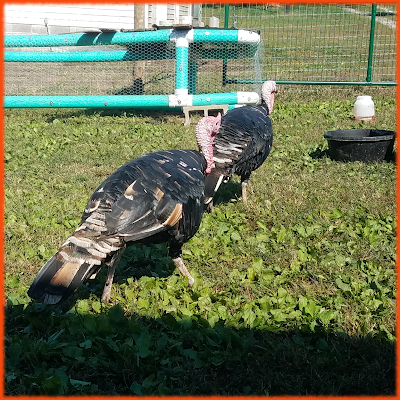 Our two black Toms have grown well and are really good watch Turkeys. The Royal Palms are not quite as vigilant. 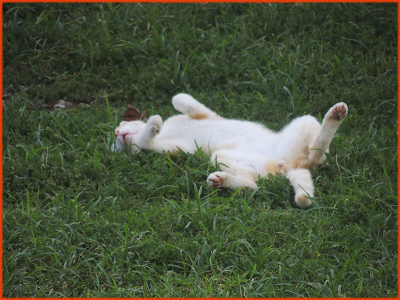 Kinky has become somewhat of a lounge about lazy Tomcat. He has his girls to feed him as they give him mice when they catch them. On the hot days of summer he always seemed to find a shady spot to enjoy the day in! 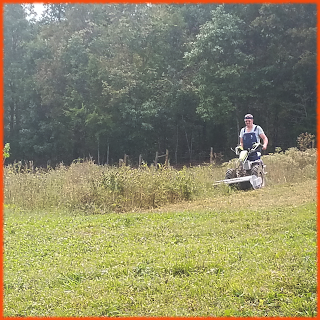 Ralph has used the Grillo and flail mower on the tall growth in the two back paddocks that were unfenced  and untouched last summer. We are  gaining ad the weed growth is much less. More grass is coming back.

So there you have it, a catch up post. We always seem to be behind in something  but then we gain in other areas. We  had our first Keifer pears just this week. Delicious! 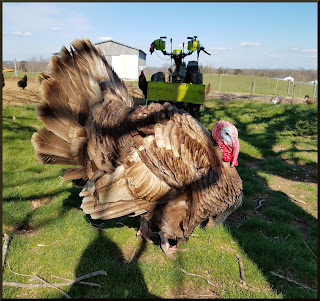 On a sad note our wonderful Chocolate Turkey, Spike, was injured in a fight. A turkey carries incredible strength with their wings and he took a blow to the head. We had to put him down. As I get older I find it harder to have animals die. Butchering the roosters for meat is different. Spike was top turkey and kept things in order here right from the start. We miss him. 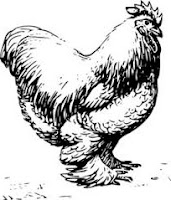 God Bless you and keep you safe.