We have the best news, a girl arrived on November 25th. 40 pounds, a sweet jersey brown and healthy and vigorous. 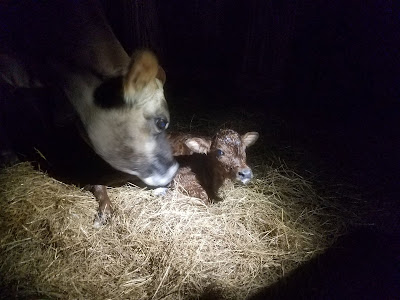 Meet Applesauce...our very first calf born on the farm. Her mother is Lassie and her Sire is the very thin bull we fed up to look as good as his genetics. 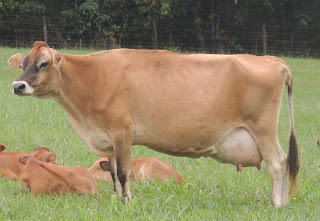 Lassie, the young cow we purchased in August of 2018. She fed two steer calves for us but was a total failure to milk. She kicks with intent to harm and despite weeks of steady and gentle but firm handling never accepted being milked. Now as a fresh mother and after prehandling and working with her udder we find she is still a nasty kicker. She very nearly hurt her brand new calf to try to kill a cat on the other side of the gate. 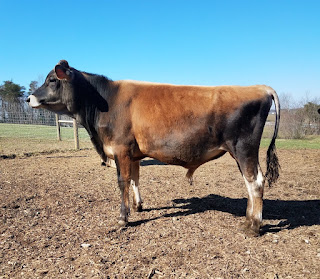 Applejack...the sire. I called Mr Rider to tell him we had the first calf from the bull and he was really pleased. He has bred 35 head to the bull, most of them his best cows. He said something of note. "The bull is really quiet and that should help with the cows bloodlines. That family were tough to work with.
So truth will tell...I akways wondered why we got a deal on a young cow with high production.

So we will see how things go. The calf is sweet and friendly and this will be a true test of gentle handling over genetic disposition. 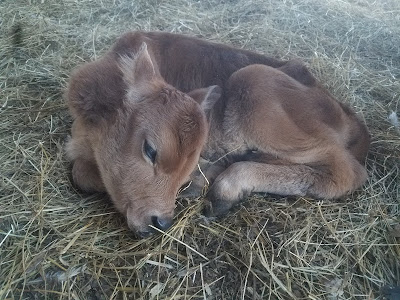 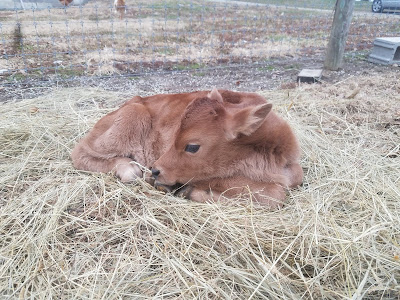 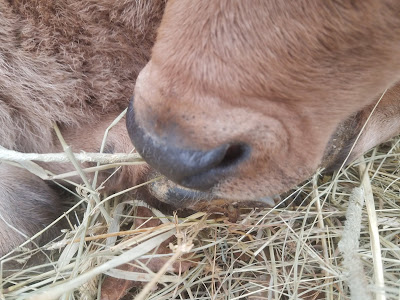 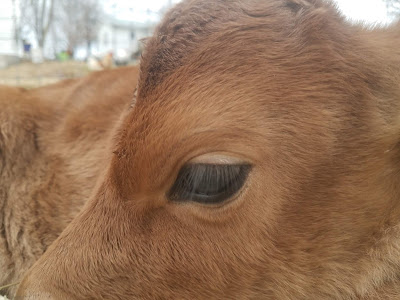 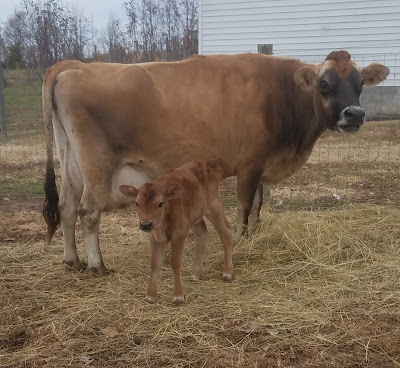 Applesauce is so very sweet and Lassie does love her despite her neurotic tendancies.  I know I love her already and will do everything in my power to gentle her to be a family milk cow.

We are so lucky to have a heifer calf. Mischief is due on the 14th of this month so that will be another adventure. Ralph is spending a lot of time with her and I think hes really looking forward to her calf.

God bless you all and keep safe.

We have had a good fall. The horrendous heat and dry broke in late October and the grass started to recover.  We had put the cows out on the hayland and that has been good for them.
The lambs were weaned on November the first. Much crying was heard for just 2 days. It was far easier than weaning the steer calves. 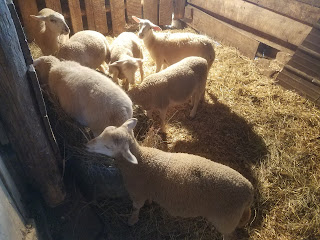 In the big stall, the seven ewe lambs. Six are from our ewes and we bought one Katadin ewe lamb from our Butcher. 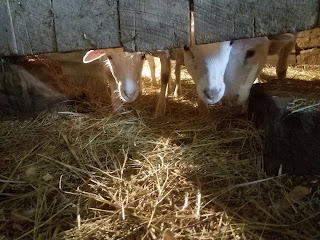 Looking out under the stall door. This was fun until Bekka, the Katadin figured she could crawl under the boards and escape! 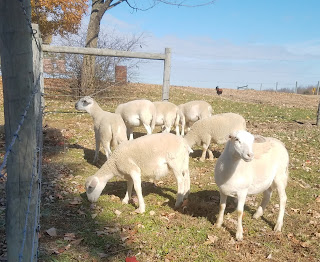 Here they are on the first day out of the barn.

The sheep have really fit into our system really well. For the most part have been trouble free.  We did have a breeding fail with only 4 of the 12 settling to Samson during early season breeding. After talking to our vet and several sheepmen we found we actually had done well to get any in lamb without using a hormone/flush system. Our ewes are mostly half Suffock, Suffolk are seasonal breeders.
Out of the 4 ewes we got 6 ewe lambs.
Now we are breeding at the normal time for Suffolk and we are seeing lots of romance.
We turned Samson out on the 12th of November. To get an idea of who is bred I am using a very simple tool. A livestock marking crayon. 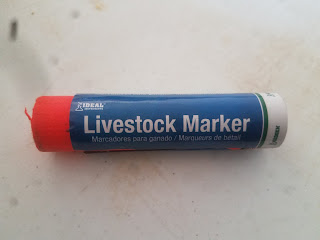 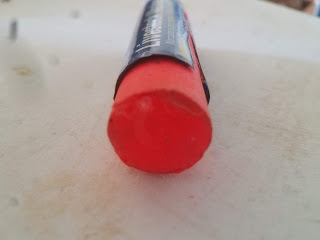 It leaves a wide bright streak on the ewes rump.

I ran a vertical stripe down each ewes rump.  When Samson mounts them the mark gets either rubbed off or really dusturbed. I wasn't sure the crayon would last but it has and is proving to be a simple solution. Marker harnesses for Rams are expensive and a pack of 3 of these Livestock markers was $3.75.
We have now got 7 ewes identified as bred. Its very exciting as the girls have grown into big ewes. 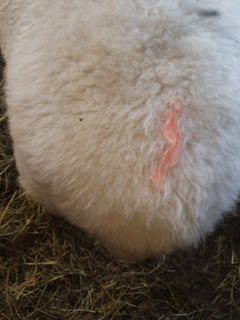 The cows are doing very well. Katie finally dried up and I do miss milking her very much. She had produced wonderful Jersey Milk for us for 22 months. She just gets to be a cow now and has grown a wonderful winter coat.
Lassie and Mischeif are due in December. Lassie on the 4t and Mischief on the 14th. 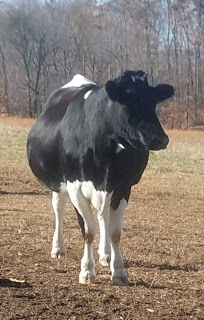 Mischief is looking wonderful. Her udder is well attached and filling nicely. I don't think she is going to be a crazy heavy milker with her Angus sire but its still wonderful to see her develop. 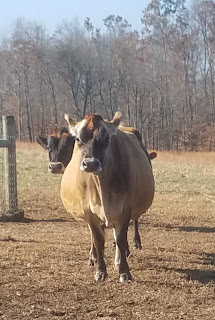 Lassie has calmed dow a lot since wegot her and will let us scratch her and check her ligaments
as she nears her date. 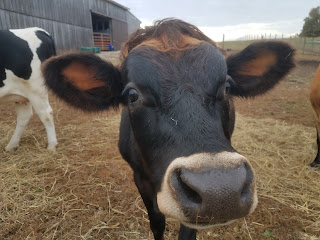 Redneck, the calf we kept for a bull has become very dark. We nicknamed him Mr. Mosey because all he does is mosey along....even to get his supper he's never in a hurry. We watch him though and are always aware he is a bull.

We had our first snow and the pups enjoyed themselves. I have made a bed for them in the breezeway, a thick pile of hay that they love. 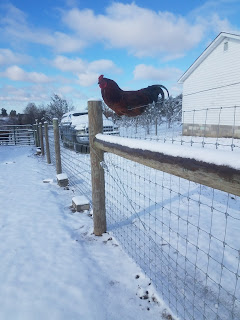 The first snow was lovely, but the young chickens had never seen it! 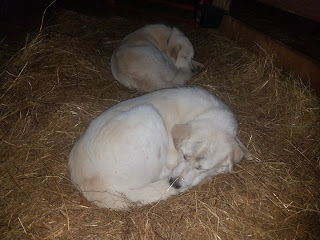 Skye and Meg curled up on a fresh bed of hay. 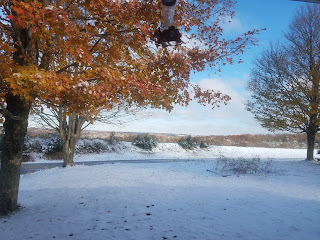 The maple trees still had some leaves when we had the snow. It was bright to see the orange leaves and white ground, all accented with the bright blue of a fall sky. 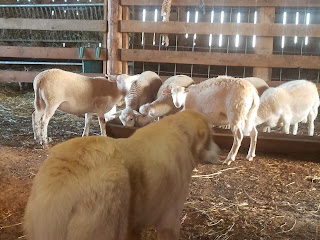 Skye watching the lambs have their breakfast. The lambs love the dogs, the dogs have always been here for them.

The dogs curl up in nests they dig and cover their noses with their tails. Sleeping in the middle of all their animals. They are getting big and are learning about threats and irritations. Right now everything is a threat, they have huge deep barks that are intimidating but still bark at the neighbors horses. Not a threat, but the pups are learning that and bark less all the time.
When our hay was delivered the young man driving the truck got here before us. He said the dogs were really upset and he was glad there was a good fence between them and him. He was surprised they are just 8 months old.

The hens are moulting and look horrible but they still go far afield to forage. We often see the white plume tails of the dogs out with the cows, then on a closer look we see perky poultry tails in the middle of it all.

Our gardens are gathering a winter layer of barn cleanings and the chickens are earning their keep by rummaging through it all.

We have cover crops on the bare ground and still have endless work to do.  Then when we sit down to a meal and its all from the land and it tastes so very good it is all so very much worth it.

So there is our update.  God has blessed us. We see his hand all around us.

God Bless everyone and enjoy the little things during your days of hard work.
Posted by Fiona at 2:23 PM 3 comments: