Commercial Food and Why it Makes us Sick

I read a wonderful Blog called "Thoughts From Frank and Fern".  Fern has written two posts lately about how restaurant food makes them feel. I was surprised at them, I have noticed eating out makes us feel unwell too. I thought it was a rare thing but after reading the comments it seems it is a real issue.

I used to raise beef cattle and I have always been involved in Agriculture. In 1980 I worked as a general hand in a large feedlot. It was a disturbing time for me. I learned a lot about commercial agriculture and this was 34 years ago.

My Father and I had a small commercial herd and raised our own grains and hays. We sold our yearling cattle as what are called "Short keep" feeders, cattle that are more mature and do not have to be on full grain for as long as younger stock. We butchered our own beef, usually a smaller less marketable animal.

When I started to work at the Feedlot I started off driving the truck that hauled the fertilizer for the crops. Then I hauled the water for the herbicide and weed killers for the crops...if needed I hauled water to mix in the sprayer for pest control.  My Father and did not use chemicals this way, we used crop rotation and rotational grazing.  I was surprised how many chemicals the farmer used to raise the crops that supplied the feedlot.

Some of the herbicides stated not to be used before the crop was harvested. If it looked like rain that information never entered the harvest schedule. We cut and combined and silaged it!  It bothered me but what did I know?

In the actual feedlot the use of drugs astonished me. I was so naive. Dad and I did use some antibiotics but rarely and not the high  power drugs or in enormous amounts. I learned some drugs had a 30 to 35 day clearance time [this is the time it takes a drug to clear an animals system after treatment]. Loading cattle in trucks to go to slaughter often saw animals near the end of the drug clearance time loaded to finish a load when the owner did not want to go back to the pen to get another one. Not a good thing to do but frequent behavior.

I worked there for two years and I finally quit, it just bothered me too much and the work conditions and smell began to irritate my  lungs.  I had learned about diseases and the use of a drug called Micotil for BRD...."Bovine Respiratory Disorder".  Cattle in feedlots inhale dusty feed, dust from the pens and all this dust has manure particles in it....no wonder they develop respiratory issues.  Micotil was a power house drug in the day and still is but it has been surpassed by many more new and powerful medications.  Drug use to keep animals healthy in a very unhealthy environment has skyrocketed since I was horrified by feedlot drug use as a young farm worker.

I have watched farming change to heavier and heavier drug and chemical use, animals are fed grains that are Genetically modified, sprayed with everything under the sun and processed in plants that handle thousands of head per day. Meat is sprayed with chlorine mist to keep the chance of contamination down and yet food is still recalled due to e-coli and other contaminants!

Could any of these influences result in modern commercial food making us feel ill? I think so. I truly believe food handling and production has got to take a long hard look at how it works and what happens to the food going through the system. Chemicals may not be higher than recommend levels per single serving but what about the cumulative effect, the continual bombardment by chemicals from treating the seeds, feeding the livestock, spraying the vegetables all the way along the food production chain?

I know I started to become aware of what goes into my food after the time at the feedlot. It seems to only have become worse and the consumer is disconnected from their food by such distance and marketing. Think about your food, evaluate how you "feel" after you eat something, grow  garden, become pro-active with what you feed your family!

Above all don't underestimate what you can do to improve your eating experience and how you feel when you have a meal from the Industrial food chain and your own food chain!

Just a short post to say its Costata Romanesco picking season. We had the first lovely green striped and slightly ridged zucchini today. We also had fried Blossoms.  Stuffed with spicey goat cheese and cheddar and cooked in butter. I added chopped orange mint and they were tasty and interesting.

I do think have to pick early in the morning though. I picked before lunch and it was hot making the blossoms softer then they should have been but they were still so FRESH! 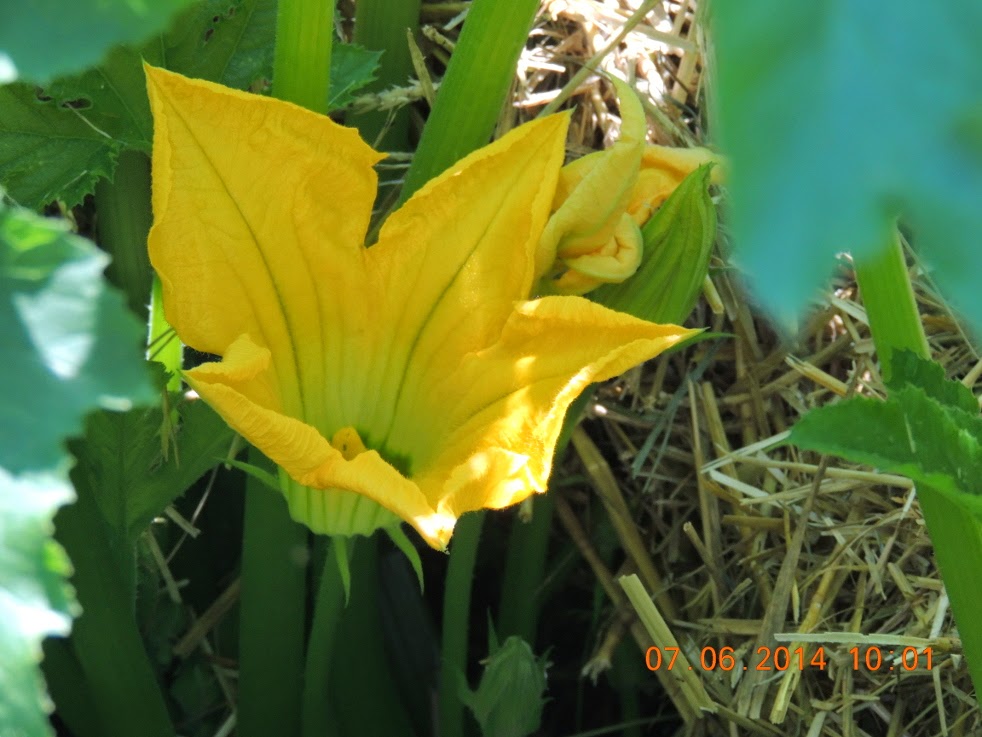 I suppose I have to be honest...anything involving butter and cheese should be good right?!

We are enjoying the bounty of summer and all the blessing it brings!