It has taken some time but we have reached another goal for our farm and food supply. We have wanted our own beef for a very long time. I have been blessed to come from a ranching background and more often than not have had a deep freeze with a supply of home raised beef in it. These animals had been bred, born and raised on land we owned and cared for. Some we fed grain to and some were totally grass fed and fattened. We developed a method for blending the use of grain and pasture. This gave us a fine flavored beef that was neither too fat or too lean. The animals had healthy livers and suffered none of the ills of feedlot beef. 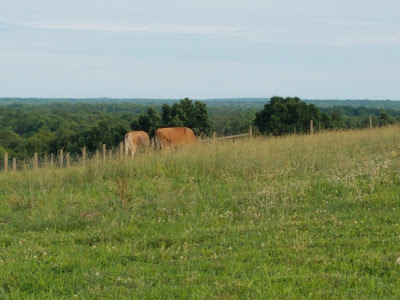 We discussed the way we wanted to feed our steers here. To get a steer to a useful butcher size takes heavy feed or time. Time is rarely taken into consideration and it should be. Young animals, like most modern beef cattle fed in CAFO’s are under 15 months when they are butchered. Tender yes,  but also lacking in flavor to any degree. Aging gives young beef it’s flavor. Grass also gives flavor, so older animals, on pasture will give your richer tasting meat without needing sauces or extra seasonings. 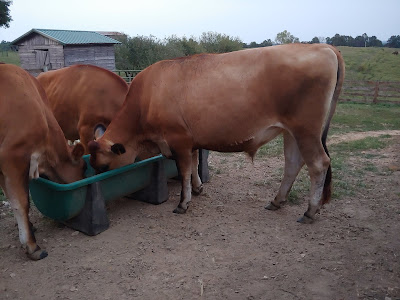 We decided to try a mix of grain, time and rich summer pastures. Ben was 24 months at butchering.  He was not feedlot fat but then he is also a Jersey which finish differently than any other breed, dairy or beef. They naturally have a more yellow fat. They do not get rib cover to the extent Holstein do. 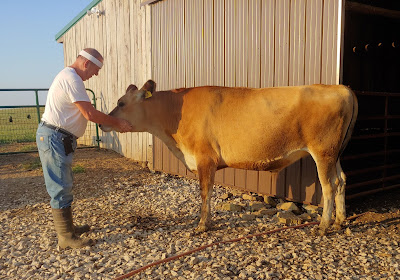 He showed good signs of finishing. He had fat pads by his tail head. His cod was holding fat deposits and his flank was also starting to get fuller. However because he was not being fed heavily he did not have fat deposited over his ribs like a beef animal on feed. His brisket was full but not padded with fat. 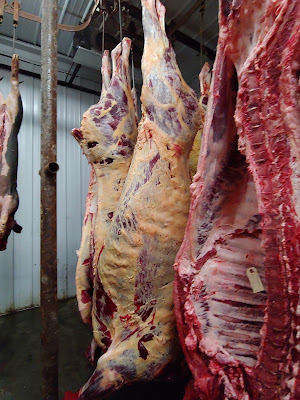 The butcher hung the carcass 14 days and then we got the results of our grain/grass and time feeding experiment.
It was exciting when we picked up the beef. It is one thing to see a carcass hanging. It gives you the first indication of your beef's quality.

The kicker though is that first cut you choose to cook and actually eat.  As we filled the deep freeze with a plethora of steaks, roasts, ribs, brisket and ground beef I decided that ribeye would be our test case.

We got everything we could, from bones to leaf fat. However somethings seem to be out of favor these days. The kidneys had be thrown away and we were glad we had made careful notes of the items we wanted.  The butcher remarked that very few customers took the heart, liver and other less traditional parts.

With the deep freeze full, I picked a package of ribeye and we went to the house.
They are not huge like beef ribeye but I would say near perfect size fir us. They looked excellent as I patted them dry. I went with a simple pan fry. Rib eye steak from our Jersey steer.
Simple seasoning of kosher salt and fresh ground pepper, cooked to a rare doneness and rested. 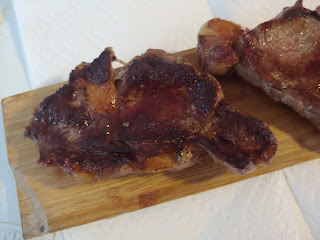 These steak were excellent, tender and with rich flavor. The fat was buttery and full tasting. There was not a lot of outer fat but the marbling is throughout the meat and rendered out with cooking, the steaks were awesome.

Since we had those first mouthfuls we have had ground beef, chuck steak and a pot roast. The quality was  well worth the time and effort. After we pencilled out the costs we found that the beef came in cheaper than supermarket beef, but we did not count our time. The infrastructure costs are not factored in but the construction of fences needed to be done for all of the livestock. The cost of a dairy calf is much much lower than that of a beef steer. After years of raising beef cattle I have to admit I would not have been able to tell what breed this beef was by taste.
We have fat to render, bones to make bone broth and beef stock.

This experiment has turned out very well. We have much healthier pastures we didnt have to bush-hog. The deep freeze is well stocked with healthy beef that had no drugs in it ever. The animal lived a good life, well cared for and enjoyed. The exercise of chores was very good for us and finally we have wonderful compost aging for our gardens.

If you have some pasture and time....consider raising a steer for beef. It can be shared with family and benefit everyone. Now I had better get stirring the beef vegetable soup. God bless and keep you safe and well.