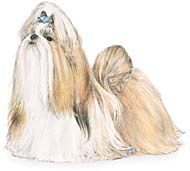 I have been blessed with good dogs all my life, They came in a number of different breeds. German Shepherd, Border Collie, Irish Wolfhound and mixed breed. None of my dogs were ever lapdogs and although I did let them in the house they always worked too.

I did however get adopted by a "Lapdog". When I worked on a big Angus ranch in Saskatchewan I met my first Shitz Tsu. A beautiful and very elegant little dog called "Muffin". He was a Champion and had trophies to prove it. I couldn't pronounce his registered name but it was followed by a slew of titles. He had been shown all over the Northeastern United States and belonged to a man who came to hunt snow geese in the fall.

He was short and covered with finely groomed hair. It trailed to the floor and was an elegant mix of Black and White. I thought he looked like a walking  dustmop. "Muffin" however decided I was worth getting to know. He followed me all over the house and one day when he needed to go out to do his dogly duty his owner asked me to take him for a walk. I sighed....this was a sissy dog what on earth would you ever do with one of these frail little showdogs?  It had snowed overnight and there was a good 6 inches of fluffy white stuff all over the farm yard. I broke a trail and Muffin trailed right behind me. He was brave and tougher than I though he would be. No whimpering or whining. He followed me like any good farm dog. We checked cows, we plugged in the tractor for later use, we even shovelled the walkways around the house. He loved it!

However at one pint I heard a strange huffing sort of grunting from behind me, I turned to see one brave little dog struggling with huge balls of snow stuck to his fur. His long hair had picked up all sorts of stuff, straw, snow and yes even cow manure. He was a mess! He had followed me all thet time and the build up finally got to be too much for him, but he never whined he just let me know he need a bit of help. He stoically stood there as I bent down and broke off the snowballs in his coat. Well I looked at this pampered show dog with a lot more respect. He might have been small and sissified by his owner but "HE" knew he was a real dog!

Of course there was a bit of a fuss when I took him in the house, he smelled like a happy wet farmdog, yes the lingering odor of cow manure followed him right to the bath where he was shampooed and blow dried back to his former fancy self.

Real dogs come in all shapes and sizes. Muffin always spent time with me when the people came to goose hunt, I bet he was the only national Champion Shitz Tsu that ever learned to chase cows or wandered around a cattle farm in winter. He was a marvelous dog and I still remember his determination to be a real farmdog.
Posted by Fiona at 2:58 PM 4 comments: