A Tale of Two Rams 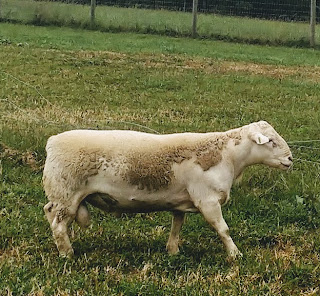 Red Raven 1889 is his registered name. He comes from Missouri.

He is an old soul. Even more sensible and easy to manage than I had hoped.

Our first ram Samson is exceptional. He is a high dollar ram but for one small flaw. He is very nervous and attacks out of fear. The breeder showed us the rams and two stood out. His main breeding ram who was not for sale and Samson. I had studied breed standards for White Dorper and he is very near ideal. A wee bit tight behind his shoulder but I probably only noticed it because I had studied type so much. 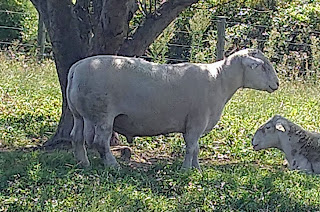 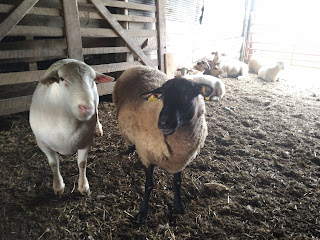 Mr. Klingler was honest. He said the ram was for sale but he was nervous, he had not taken him to the big show and sale in Tennessee because the ram would have lost his mind. He also said he was from a national champion ewe and she was 10. He showed us 3 more very nice rams but not the quality of the nervous boy.

Ralph and I had budgeted 700.00 for a ram. This ram was 800.00., however he was so good...we decided to take a chance. Mr. Klingler walked up to him and caught him but you could tell the ram was getting upset. Scared not mean.

We got him home and decided to turn him in with the ewes right away. We felt the disease risk was low enough and we really wanted to keep him as calm as we could.

We called him Samson. He is truly beautiful and the Dorper breeders I talk to say he really is superior. Genetically and structurally he is about a $2000.00 ram. His nervousness was enough of an issue Mr. Klingler felt he was not suited for purebred breeders.

He dislikes me and will charge me if he gets scared. However he loves Ralph and is so good for him.  I am always aware of where he is and I always have my stock cane when I am with the ewes.   His lambs are so good. We are very lucky to have been able to get a ram like him to start our flock. The disposition seems not to pass on. His lambs are quiet and friendly.

As you know from sire selection...finding the first good sire is a challenge..and getting the next one is even more of a challenge.

We needed a young ram who complemented Samson and who had a quiet disposition right from the start. We wanted a ram from a ewe line with longevity and udder durability, good feet and shedding at least 70%.

He had to be structurally correct and very correct over the shoulder into a wide well spring rib. Capacity with a deep body and length were also in there. I wanted a bit more butt, especially in the lower round and inside round.

The first ram we found sold for 2245.00...I had a hunch he was going to go over our budget. We kept looking and then we got our stimulus check so we upped our budget to 1000.😳

I looked at so many rams I had just about given up. 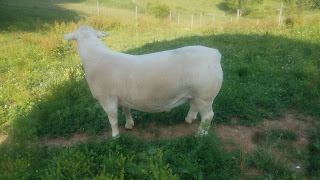 1889 with his companions...Aberdeen and Snowball who should lamb to him in November 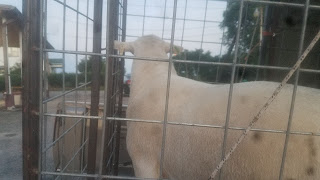 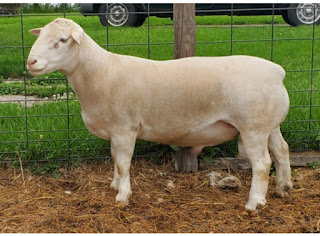 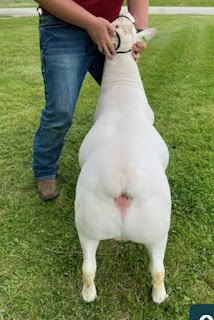 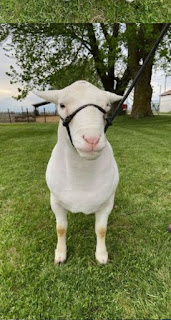 Two of the Catalogue Photos.

I had never bought online before but the  breeder was awesome and 1889 fit 90% of my requirements. His mother is 12 and has a terrific udder even now at the age she is..he is long and thick and moves well on good feet. One of the first things Andrew said about this ram #4 was how quiet and sensible he was and that the ewe was quiet.

His flaw is he is short. He will never be a huge ram. It is not an issue for us, especially when he fills all the other criteria.

When we got him home....we had to meet the livestock hauler about an hour north of us.....1889 was so laid back. Ralph and the trucker carried him with much grunting across a parking lot and loaded him in our crate. He just accepted it. He unloaded at home with the same calm outlook.

He is a pig though...he will do absolutely anything for food. It's his obsession😆 Somehow the name Doofuss seemed to fit. 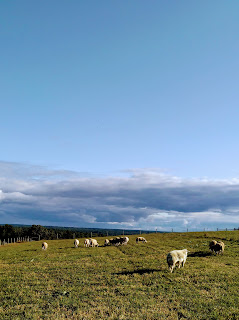 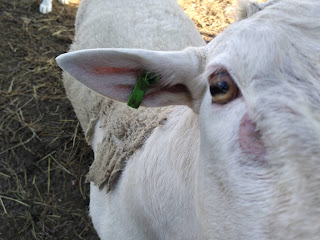 Seriously can you feed me now! 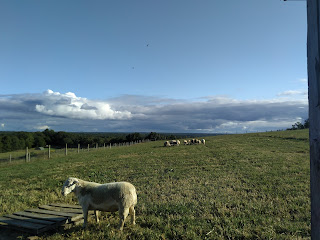 Okay....I give up...I am weak with hunger but I will check the girls. 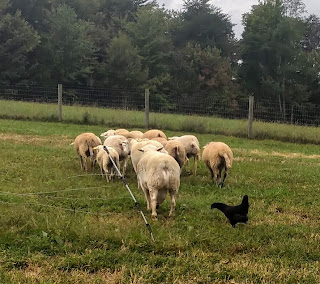 We turned the Rams out with the ewes on September 21. He is settling down with his girls...they are getting used to his management style and as he gets used to his job he is becoming much gentler with the ewes. He still loves his food though...almost as much as his girls.

So goes the tale of two Rams. Samson quietly goes about his business with his ewes. He's always happier if he is out with a bigger group. We have 13 of his daughters with Doofuss. They are uniform of type and well grown. Now the next step of our journey starts with lambing in February....lambs from young ewes that were born here.

We can hardly wait.

God Keep you safe and healthy. Be strong in the times ahead.