One thing we plan on growing a lot of this year, now we have room, is Peanuts.
We tried them for the first time in New Castle. We did not have enough room for a lot of them but we tried three Varieties:
Carwhile's White, Schronce's Deep Black and Tennessee Red Valencia.

We ended up with about 10 pounds of real, chemical free home grown snacks. I learned a lot form growing them and I still have to get better at roasting them!

So here is how it went:

Ralph asked me if I wanted to grow peanuts one evening....I looked at him like he was "Nuts". Peanuts, they take way to long and must be really difficult to grow! He replied to me...we live in Virginia...some of the best peanut growing land in the USA!

So we ordered from Southern Exposure Seed Exchange. The following information is from their catalog. 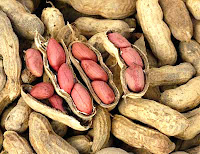 120 days. [Introduced 1989 by SESE.] Family heirloom from SW Virginia since 1910. Grown by Frank Carwile for over 75 years since he was given this peanut by a traveler when he was 8 years old. He later tried other varieties but found none with a better flavor. 2-4 seeds per pod. Plants have average disease resistance but excellent production and drought resistance. 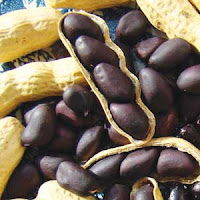 110 days. [Selected since 1980 by NC gardener Gordon Schronce. Seedstock sent by his son Arty.] Black peanut selected for larger seeds with darker (violet-black) skins than Carolina Black and 3-4 seeds per pod. Very productive. Gordon’s favorite way to serve these is to fry up a mix of black and red peanuts in canola oil.
An interesting link about these Black peanuts. 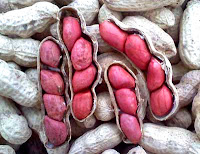 (Valencia Tennessee Red) 110 days. [Pre-1930] Rich, sweet peanuts with red skins. 2-3 seeds/pod. Easy to grow without hilling, even in clay soils. An early variety for those who have trouble maturing Virginia-type peanuts.

It was weird breaking open the peanuts and planting them...first I had to try one...NOT good....they do need roasting! 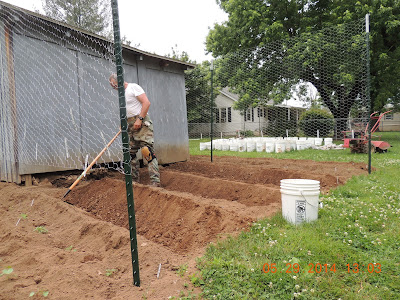 Then we planted them. Not too deep and firmly pressed into the new turned soil.  You can plant them in the hull but it is faster to remove it. Be careful not to remove the paperey husk though. Plant the seeds about 1 inch deep and water weekly.

Peanuts need full sun. If you have heavy soil, ensure good drainage by working in enough organic matter to make it loose, we had amended this area with lawn clippings and used potting soil. 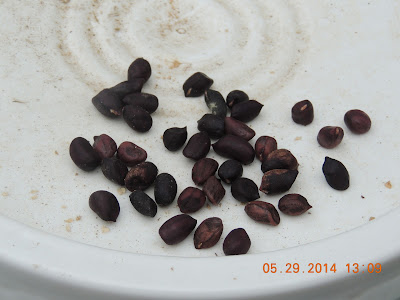 The Schronce's Black ready to plant. 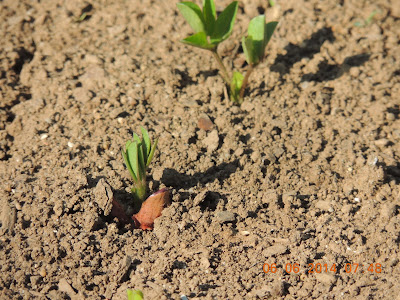 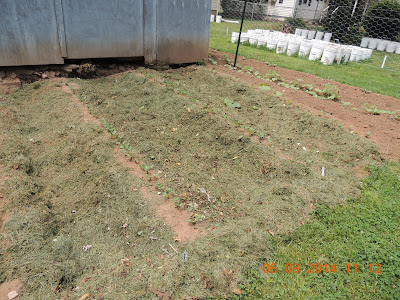 Grass clipping mulch added after the peanuts had sprouted. You can  just see the row of Carwhile's poking up through the soil. 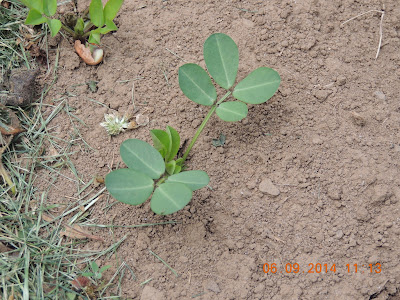 A healthy young peanut plant. They look a lot like Alfalfa at this stage. 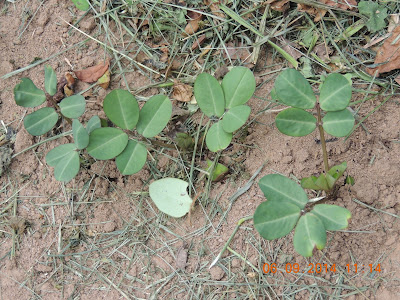 They grew quite quickly and I was forever out there marveling that we were growing peanuts! Ralph says I am easily amused... 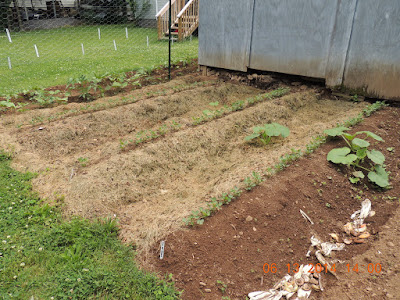 We planted them on May 29th and this photo was taken on June the 13th. 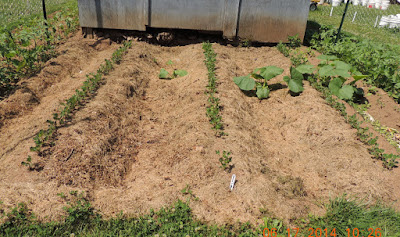 June 17th....you can see a volunteer squash to the right. 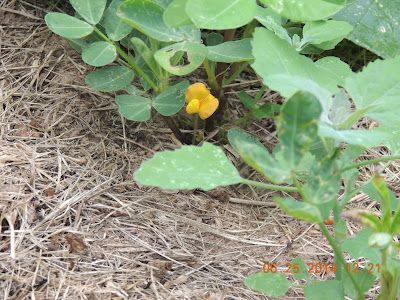 June 25th...just short of a month old. They have small yellow flowers a bit like a violet. They flower at the base of the plant. The honey bees loved them. 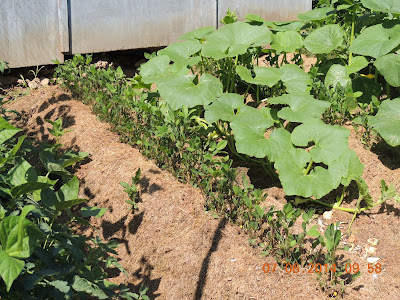 July 8th...They did not get really tall. They did get bushier though. So did the crazy squash! 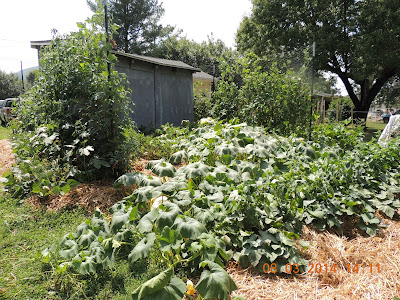 August the 3rd. Squash issues but the shade from them seemed to ease the heat stress on the peanut plants, they did not wilt in the heat of afternoon. 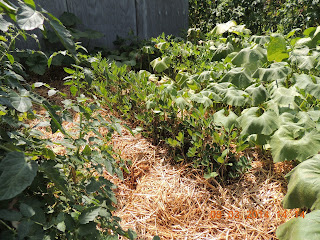 We had added straw mulch at this point to help retain moisture as the weather had turned dry. The peanuts did not like town water and whatever chemicals are in it. They would look pale for a couple of days after a watering with the treated water so we aired buckets of water and hand watered them. 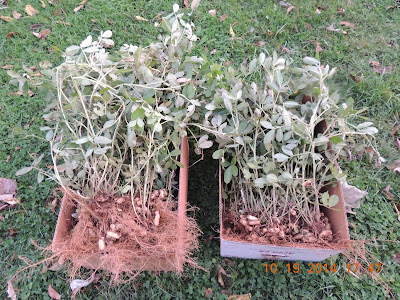 October 19th we harvested, there was a severe frost warning.
Ideally the tops should have dried on their own. However you can see we had peanuts! 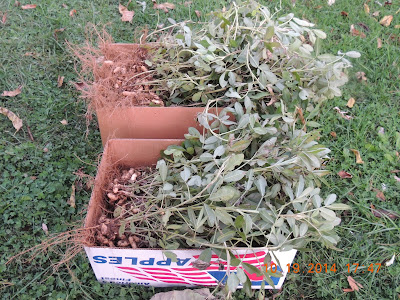 After pulling them up we set them in the shed to air dry and cure for two weeks. 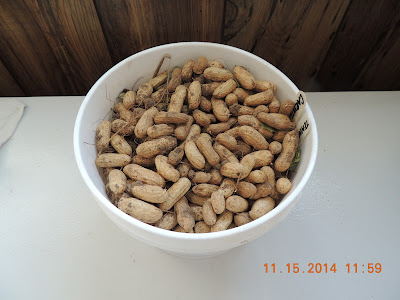 Here is the 2014 peanut crop. A good size we thought for our first attempt. About 10 pounds.

Now we are finally on our farm and have the room to grow lots of these wonderful plants. They are a healthy snack and we think will be well suited to our vision of growing our own food. This year we are growing the varieties above plus two new additions:

Information from Southern Exposure where we got the seed. 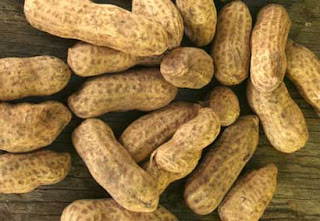 110 days. [Introduced 1999 by SESE from seed sent by Derek Morris.] One of the varieties grown during the 1800s was the African peanut (also known as the N. Carolina peanut). It may have been a black peanut, possibly the same as ‘Carolina Black.’ According to food historian William Woys Weaver, the black peanut may have been used as a substitute for Black Bambarra (African ground nut) by the black community. Black Bambarra is important in African folk medicine as an aphrodisiac. The N. Carolina climate won’t support black Bambarra, but black pea- nuts grow there without difficulty. Carolina Black produces sweet-tasting, black-skinned peanuts that are slightly larger than Spanish peanuts. 2-3 seeds/ pod 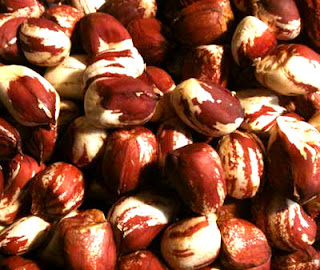 110 days. [Peanut said to have been developed in the school colors by a Texas university for selling at football games. Seed given to Ron Thuma by friends in Andover, KS.] Seeds have lovely red-and-white streaked skins. 2-4 seeds/pod, compact 3-ft. plants grow well in heavy clay soil.

It is always a plus when the food you grow is pretty to look at and tastes marvelous. I will take you through the harvesting and roasting steps for the 2016 peanut adventures this fall, God willing and we get a good crop.
Life is so full of marvelous things don't be afraid of trying things you have not done before.

God Bless and be safe! 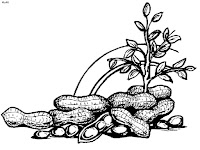